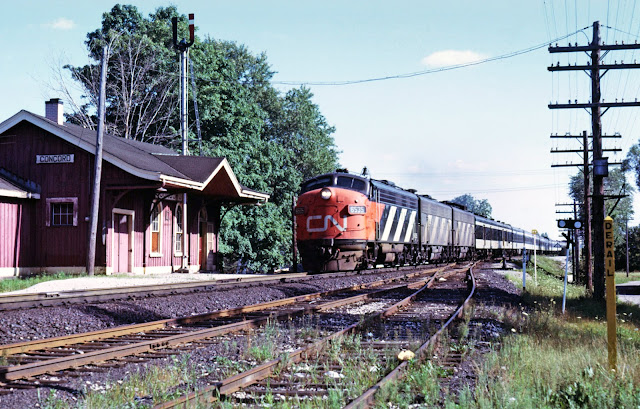 CN's Auto-With-You service was operated from 1972 until the VIA era began in 1976. Between 1967 and 1972, CN had received requests from passengers to travel with their own automobiles, based on similar service in Europe. Another precedent was the Washington-Florida Auto-Train service initiated in 1971. CN's Super Continental blasts through Concord, ON in these undated photos kindly shared by John Wallington, with a 57-foot auto transporter in passenger colours bringing up the markers: 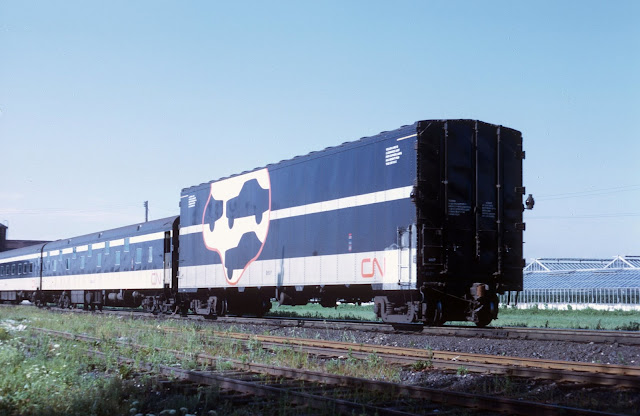 This post is actually a postscript to an earlier post on CN Car-Go-Rail and Auto-With-You services. Car-Go-Rail was not attractive to passengers because of its limited service and schedule, and the passengers were without their auto while it was in transit. CN experimented with Auto-With-You service on train Nos 3 and 4 between Toronto and Edmonton. There was daily service with six autos per train. The passengers travelled aboard the same train. Passengers delivered their auto four hours prior to departure, with the auto made available soon after arrival in Toronto or Edmonton.

In this 1973 online auction site photo, CN 8516 has two 57-foot auto transporters at the loading area at the west end of Toronto Union Station, by the CN Express building:

CN commissioned a survey among Auto-With-You users, the results of which were published in September, 1972. Of the 192 questionnaires mailed to Canadian and American users of the service, 112 were returned, giving a 60% return rate. These were peak-season passengers, and the survey was returned in a pre-addressed, postage-paid envelope to encourage participation. Highlights of the survey results:
What did passengers think about the service?
Why did passengers use Auto-With-You?
Unfavourable comments about Auto-With-You:
Unfavourable comments about their trip aboard CN:
What about the cost?
What about the prospect of using open auto racks?
These results give us contemporary reaction to CN's revolutionary service, perhaps pointing to some reasons why it was not continued!
Running extra... 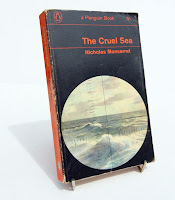 I finished two books recently. Yep, got 'em both coloured. Seriously though, I actually read two books. A rare ramble into fiction for me, with a re-read of Nicholas Monsarrat's two-years-in-the-making The Cruel Sea, telling the story of a corvette (non-sports car corvette!). Also, Mission Thrift Store dollar purchase of Alec Ross' 1986 Coke Stop in Emo. These two make me want to stay on dry land, away from U-boats and rapids, respectively!
Kudos to author Ross for using the adjective "Brobdingnagian" at one point in his saga. His usage loomed large for me. In fact it was gigantic! Hugely impressive.
Running extra...Extra Election Edition!

Riding home from Toronto to Kingston one evening during the Stephen Harper reign, an elderly couple with special needs was seated apart in the Business Class car. They spoke to the attendant who told them he'd see what he could do. Then, a passenger boarded at Oshawa and was seated behind me in the single seat row of 2+1 seating. Overhearing the seniors' plight, he quickly volunteered to switch seats, giving them two seats together. After they switched, the couple expressed their thanks and talked to the fellow as dinner service started. The Oshawa passenger volunteered that he was going to Ottawa. He was going there for a veterans' event. They clearly had no idea who he was. I recognized him as Erin O'Toole, the then-Minister of Veterans Affairs, though he didn't tell them that. As I disembarked at Kingston, I briefly told him 'thanks' for making those elderly folks' trip much more enjoyable. I don't care about your or my political stripe, but integrity is doing the right thing - especially when no-one is watching. (Well, I was.)
Speaking of gigantic, be sure to vote in this Monday's election. In fact, vote early and often. You can even bring your own pen or pencil! No crayons. Thousands of our forebears died to build and preserve Canada, and while it's eminently Canadian to sit and grouse about our government, not voting seems un-Canadian. This election will not be rigged. Please vote for the party of your choice. The results for PM may actually take until the AM, so be patient.
Eric at 9/17/2021 07:54:00 PM
Share