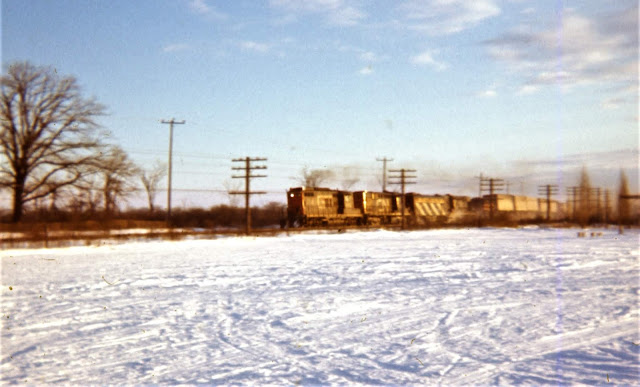 Your eyes are not deceiving you - that is indeed passenger power on a freight train! A Grand Trunk Western Geep leads three other units, including an F9B on an early-morning hot piggyback train. This was likely an example of CN No 250/251 between Toronto and Montreal that often rated passenger power to maintain an overnight schedule - usually nocturnal and rarely photographed in the middle of the Kingston Sub! As express trains, 200-series trains could run five mph faster than freight trains, thought not exceed 65 mph. (Jakob Mueller has also added that this indeed was likely a No 251, and that it's the only photo he's seen - he's seen a lot - with GTW power east of Toronto. It's likely a surplus 4900 since Amtrak did not continue GTW passenger service after May 1, 1971.) Top photo by L.C. Gagnon, 1973.
My early-morning trainwatching usually started after the nocturnal passage of these hot trains. There was one day, however, on which I noted passenger units on an express train. Even to a neophyte railfan, this was something notable!

CN No 251 at Mimico on October 1, 1978 - online auction site photo (above). CN 6530 leads an F9B, two CN RS-18\s and a GP-9 and piggybacks.
Passenger train power was often prescribed for these trains, departing Montreal with power dispatched from Pointe St. Charles shops, where the only scheduled maintenance performed was on the units' electric equipment. All the diesel units were maintained at Montreal Yard. Rather than operate light engine movements between PSC and MY, units requiring scheduled maintenance were routed to Toronto to power No 250 which operated directly to Montreal Yard. Passenger units off inspection went to a train terminating at Bathurst Street/Mimico to go directly into service there. The planner at Spadina would line these units up on afternoon trains out of Toronto. Spadina roundhouse did not do the major inspections and heavy repairs. The Hanlan's Point switch job worked the Bathurst Street ramp, pulling cars for No 252, followed by crew sleep time, then waking up for No 251 when it was setting off just west of Bathurst Street, then spot the set off at the ramp. No 253 was also a symbol used for Montreal-Toronto trains. No 252 carried piggyback and Dofasco steel loads eastward from Hamilton.
The trains were renumbered to Nos. 251/252 in the late 70's about the same time as all the express boxcar traffic vanished and they became just container and piggyback trains. They did continue to see VIA passenger power. As dedicated TOFC/COFC trains entered the CN schedule and downtown piggyback terminals closed, the 250-series trains stopped operating.
In the 1970's and early 1980's these express trains passed through Kingston around 2315 to 0030, usually with three units. The FP-9A's were very common in this service as were FPA4's, 3100-series RS-18's and 4100-series GP9's. A typical locomotive consist was one FP-9A, three F9B's, an FPB-4 and a GP-9 for power.
Freight forwarder traffic (higher priority carload or less-than-carload cargo, loaded at terminals near major yards) was often handled in 40-foot boxcars. Train length was usually no more than 50 cars - these were fast trains, not long trains. Early 20-foot containers crept in as the intermodal revolution took hold. These would have included 60-foot CN container cars holding three containers, and 46-foot piggyback flats. In the late 1960's, these trains could have handled CN passenger-scheme express boxcars and baggage cars.
Lots o' links:
Running extra...

A key Trackside Treasure blog partner, my brother Dave, has temporarily suspended work on his long-running Rolly Martin Country blog. Recently, blog partners Edd and Michael have also found a break to be helpful. The most constricting seven words in common usage have to be, "...because we've always done it that way..."
Trackside Treasure rolls on, but that doesn't mean that a sabbatical will never happen here. So far, it's only happened when I go on vacation. Those being so rare, I'm on a near-permanent staycation so stay tuned for more! When a pastime feels like a job, or life events take a front-seat, it's time to re-evaluate and re-shuffle.
Having two grandsons again visiting, seeing their enthusiasm to see, hear and wave at every mode of transportation passing near our house is invigorating. Trains are 'Voo-voos!' and there is interest in seeing them, even when they can only be heard, due to houses being in the way. A defunct drive-thru serves as a portal to transportation interests: 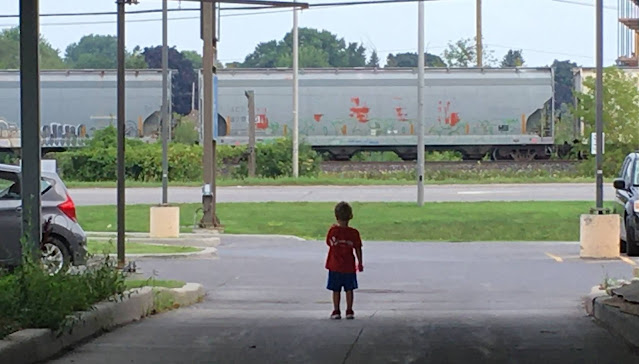