Boxcars were the freight car of choice for grain transportation from the early 1900's until they were replaced by gravity-discharge aluminum and steel covered hoppers beginning in the 1970's. The covered hoppers were easier to load and unload. Boxcars required wooden or cardboard grain doors, to hold the cargo in while the car was being loaded via the door. By 1987, terminal car dumpers still existed for boxcar unloading, but these massive mechanisms were quickly aging, and costly to repair and operate. In Thunder Bay, 14 of 21 dumpers were over 25 years old, and 25% of them were predicted to be out of service by 1992.

I observed CP 269331 with  the spartan lettering of an International of Maine-assigned car, spotted at the Meadows, Manitoba elevator on CP in 1984 (below). This well-travelled boxcar had nothing for the elevator agent to cooper (nail) the grain doors to, so he told me that he kicked it by in favour of four covered hoppers: 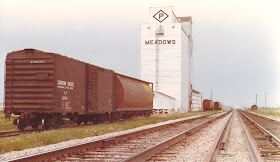 CP designated some boxcars in its 248350-267210 series, a wide swath of boxcars built between 1941 and 1953, for grain service as early as 1970. Wood lining in the cars was removed as they would no longer handle general merchandise, only grain. CP also funded the rebuilding of more 40-foot boxcars for general service, such as handling bagged flour. Used in grain service at the end of the boxcar era, these cars were numbered in the CP 17000-24000 series, and the 268000-269000 series. Some International of Maine cars ended up in this group! Also in the early-1970's, CP pruned its fleet of six-foot-door cars that were quickly becoming obsolete for most shippers. Over 3,600 cars were renumbered into the CP 108000-125610 (some sources indicate CP 115520-120692) for grain service.

Forty feet, sixty tons - when loaded, these annoyingly antiquated conveyances carried grain in 60-ton loads. Here, these slanted, scripted or multimarked boxcars were only light weight - empties. Amazing how shallowly the multimark, around since June, 1968, had penetrated the paint palette of the grain car pool! Westbound over the CN diamonds at West Tower in Portage la Prairie in September, 1985:

Major rehabilitation programs undertaken by the railways, and at the expense of the federal government and the railways, produced 2,000 cars in 1974, 3,000 in 1979 and 2,000 in 1980. The latter programs were only expected to extend each boxcar's service life by five years. In other words, these cars were just about worn out, and it was possible that there would be no useable grain boxcars left by 1985 if no action was taken.

A variety of CP grain boxes near Portage MPE Pool ‘A’ (above). Rusty and weathered slanted-lettering CP 118905 and refurbished CP 123669 hint at the breadth of paint schemes and years of weathering of the fleet, photographed at Portage in August, 1981. Refurbished CP Rail grain boxcar 123081 with script and stacked sisters returning west for their umpteenth loads on CP's Minnedosa Subdivision northwest of Portage on May 29, 1984: 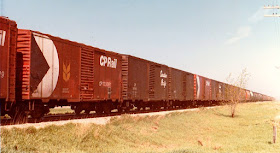 It was not uncommon to seeing a boxcar train of loads heading east through Portage, with a leaky car door dropping grains of wheat along the right-of-way - all the way to Thunder Bay! On the light-rail CN Oakland Sub, north of Portage la Prairie, workaday CN 427443 with cut-down ladders and no roofwalk, has been coopered with steel banding and thick, cardboard grain doors by the MPE agent at Longburn in May, 1984: 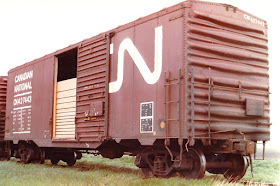 Now called 'iconic' or even 'epic', back in 1985 it was just 'railroading' on the Prairies. The days of prairie branches served by aging power hauling equally aged boxcars were waning. Read more about some 1982 grain train boxcar consists here. 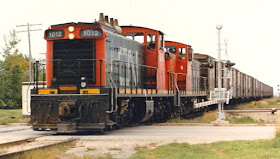 
It was cheaper and easier for the railways to repair boxcars for use on lightweight branchlines, than to upgrade the branchline infrastructure - roadbed, ties and rails - to support heavier covered hopper cars. The federal government boxcars rehabilitation schemes undertaken in 1979 and continuing into 1980 included:
A yellow wheat sheaf - a smaller version of the government grain hopper scheme - was applied to the left of the door. Under it was a stencilled bilingual message, reading in part, "REPAIRED WITH FINANCIAL CONTRIBUTION FROM THE GOVERNMENT OF CANADA". Cars emerging from the rehabilitation scheme were formerly CN 520000-539009, renumbered CN 427800-428999. Rehabilitated CP cars were renumbered CP 122000-122999 and 123000-123999. CN did most of the  shop work at Transcona and Regina.

Refurbished slanted-CPR 123541 shows its spray-painted areas of repair, wheat sheaf and stencilling, denoting its refurbishing in May, 1980 for grain service (above). Also photographed on June 7, 1984, CP 123692 has been patched, painted at CP Winnipeg Yard:

CP placed their wheat sheaf stencil on the boxcar sides slightly lower than CN did. CN boxcar 428919 (above - Blt 5/54) last outshopped in September, 1980. “Repaired with financial contribution from the Government of Canada”. The repair and repainting was more obvious on these cars due to the use of current CN paint on the weathered, chocolate brown sides of maple-leaf boxcars. Spotted on team track in front of Portage's CN station in August, 1981:

On May 24, 1980, transfer van CN 76555 awaits the passage of a freight train through Kingston including CN government-rehabilitated boxcar CN 428701. Note the somewhat rare yellow stencilling under the wheat sheaf on this car, as well as the yellow door-opening aid welded to the door:

The lower-right yellow stencilling denoted no roofwalks on the cars, though the cars retained high ladders and handbrake wheels. CN 428635 is a 10"0" height car, refurbished and received its yellow push plate, wheat sheaf logo and bilingual message beneath it in December 1979, at Portage June 3, 1986:

A 1983 study by the Grain Transportation Authority estimated boxcar capacity and requirements to 1991. The results showed that within that timespan, there would be too few boxcars to service the port of Churchill and/or the lightweight branchlines. CN's boxcar shortfall was predicted to occur as early as 1985. While not posing an immediate problem, due to CN's practice of light-loading hopper cars on lightweight branchlines, something clearly had to change. The very epitome of the need for the coming change - rehabilitated CN boxcar single-car spotted at aged Federal, Searle and Pool-lettered elevators at Colfax, SK on an unseasonably and unreasonably cold September, 1985:

CP was also predicted to experience a boxcar shortfall as early as 1990. Even if all CN's boxcars were loaded for Churchill service, there would still not be enough cars. Use of CP's boxcar fleet could forestall the deficit until 1988.

CN not only sent loaded boxcars of grain to Vancouver and Thunder Bay as CP did, it also sent cars mostly from northern prairie elevators to the Arctic grain-shipping port of Churchill. This line was a political football continually passed around between governments, shippers, and farmers. In 1986, while the future of the port was being debated, 339 "buffalo" boxcars with 8-foot doors were rehabilitated at CN's Transcona Shops in Winnipeg, drawn from 1956- and 1957-built cars from the CN 540760-545759 series, becoming CN 429000-429338. Transcona could complete six cars per day.

Another series of 1600 "buffalo" cars, from the same feedstock series, CN 445000-446615 followed in 1987-88. The cost of $17,000 per car was equally split between the federal and Manitoba governments, so the cars were painted with the Manitoba and Canada logos.  The cars were to be unloaded at Thunder Bay or Churchill, stencilled thus: "THIS CAR NOT TO BE INTERCHANGED - FOR CHURCHILL AND THUNDER BAY GRAIN SERVICE ONLY". Primarily filling the Churchill elevator in spring and summer, the buffalo boxcars would travel to Thunder Bay with grain in winter, once Churchill shut down in late October. 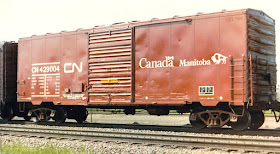 Newly-refurbished Buffalo boxcar CN 429004 was westbound through Portage la Prairie on June 3, 1986 (above). CN 429035 is another Buffalo boxcar (below) on the same train. Note eight-foot doors and new paint, even on trucks. Another key feature is the Churchill and Thunder Bay-only stencilling beneath the CN logo.

In 1986, CN was unable to move 590,000 tonnes through the port with its own fleet, and had to borrow boxcars from CP Rail, as had been foreseen. As late as 1994, CN was suspected of causing artificial shortages of Churchill-dedicated cars by squirrelling them away on isolated sidings, a contention that was publicly challenged in print by newspaper advertisements from the Hudson Bay Route Association! Average yearly shipments through the port from 1984 to 1994 were 379,000 tonnes, with a high of 621,000 tonnes in 1983. A dismal low of 50,000 tonnes was shipped through the port in 1988. The final train of buffalo boxcars departed Canora, SK for Thunder Bay on December 5, 1996. By 1997, covered hoppers would finally be allowed to deliver shipments over the Churchill line. Long-held CN conventional wisdom that covered hopper harmonic oscillation on CN's Herchmer Subdivision trackage would lead to derailments was disproved during testing in 1995-96. 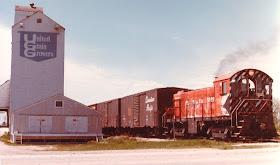 Watching Portage switcher CP S-3 6569 switching grain boxcars at the United Grain Growers elevator at Eighth Street in 1984 (above), I knew the journey to a distant terminal, likely Thunder Bay, would soon begin. Direct grain shipments to the U.S., and a shift in grain markets from Europe to Asia, were already signaling the decline of grain export from the Lakehead. In 1983, a record 17.7 million tonnes were shipped from the port, compared to less than a third of that amount, less than a decade-and-a-half later. By 1995, CP's remaining boxcars only operated on Manitoba's Russell Subdivision and a few lines in Saskatchewan: the Dunelm, Shamrock and Neudorf Subdivisions.  Their last year of operation was 1996. That summer, CP boxcars loaded at Gretna MB, and Simmie, McMahon and Esterhazy SK were sent east to Thunder Bay, returning waybilled to Winnipeg for scrapping. The final CP subdivisions restricted to boxcar loading were officially abandoned on July 31, 1996. 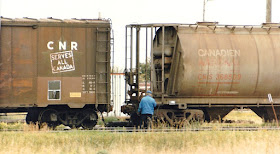 And that’ll do! Trainman directs engineer’s shove back via radio. These covered hoppers brought into Portage, likely lifted farther east on the Rivers Sub, are being coupled to the grain boxcars from the west on September 18, 1985. Note the depressed truck springs on both…loaded! The other half of Canada's grain fleet comprised covered hoppers - read more in an upcoming post.

This post is a long-overdue updating of my original 2009-2010 posts on CN and CP grain boxcars and cylindrical covered hoppers - larger, reformatted images and additional information. Since these long-ago posts are frequently linked-to on online forums, I'll allow them to live in their long-ago early-Trackside Treasure format, but this two-part series will hopefully present an updated and upgraded account of Canada's grain fleet!
Check out Marc Simpson's excellent post on modelling the CN boxcar fleet.

Wishing Trackside Treasure readers a Happy Easter. Hoping you have time to reflect on sacrifice and reward, on suffering and rebirth, on times past and times to come. When this time of pandemic is over, we will be a changed people and our world tinged by what we're experiencing now. Through it all, the Trackside Treasure community is all in this together. Stay tuned for more posts that are unceasing and unstoppable. And huge props to Al Gore for getting us ready! 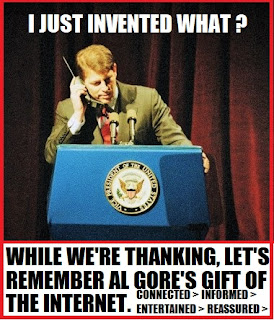